Recently I bought an ice-cream maker and I’ve been trying out a vegan ice-cream recipe. It’s simple stuff but still lots to get wrong.

You heat the mixture before putting it in the fridge and then ice-cream maker and Kat wondered if you could JUST leave it near the stove for a while instead because the sugar would still melt and it would be faster to cool down afterwards.

So I look at the recipe and I suspect that the corn starch would be a problem with that, because it might need a certain temp for the proteins to unravel and thus thicken the mixture. The BBC recipe JUST says ‘heat until steaming’ which has NO meaning to me whatsoever. So I do some googling. This science site says 95 degrees is needed for corn starch to do its thing, which seams high but authoritative, but then I find this ridiculously thorough paper with a couple of hundred citations that says 64.

So I’m convinced by 64 but then I’m like ‘hang on, I have both corn starch and a kettle, so I can do my own tests’. Now, this isn’t because I think the paper is wrong, it is because I want to check I can replicate it, and it would be nice to feel the viscosity of the liquid at different temps. 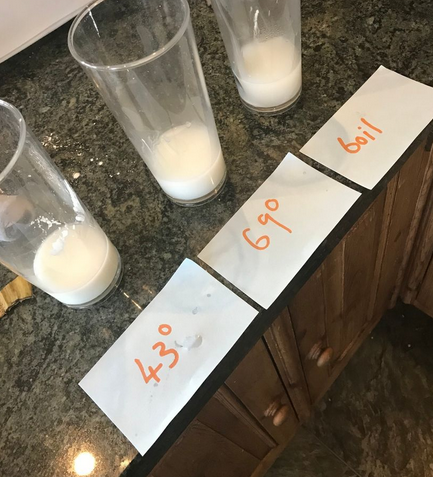 So I set up three glasses with a tablespoon of corn starch in and put in a cup of water at different temperatures- and it was really interesting! Obviously the internet was right, but doing it yourself is so much better than reading about it. Especially given all the ways that it turns out I can screw up such a simple experiment. Some of those glasses with never be the same again. Actually that was the main thing I learned: if you add the cornstarch to boiling water it instantly turns into a solid ball of goo because the proteins unfold so quickly, which is why receipies tell you to mix it with a small amount of liquid before adding it to something hot.

Anyway - the punchline is that I accidental added twice as much salt to this batch of ice-cream, which prevented it being quite the hit I expected. Still very popular with the kids.