Recently my mental health has improved. I didn’t really think that anything was particularly wrong with it to start.

I’ve had back pain on and off since about 2007. I tried everything to get rid of it. Between 2015 and 2016 I realised that my back pain was psychosomatic.

It was hard to deny - I long had a script that makes a chart of my inbox as a proxy for stress (detailed in an untidy range of posts, of which this is probably the best introduction) and when I looked at the long term version, it was hard to deny that the peaks where at the same times as major outbreaks of pain. 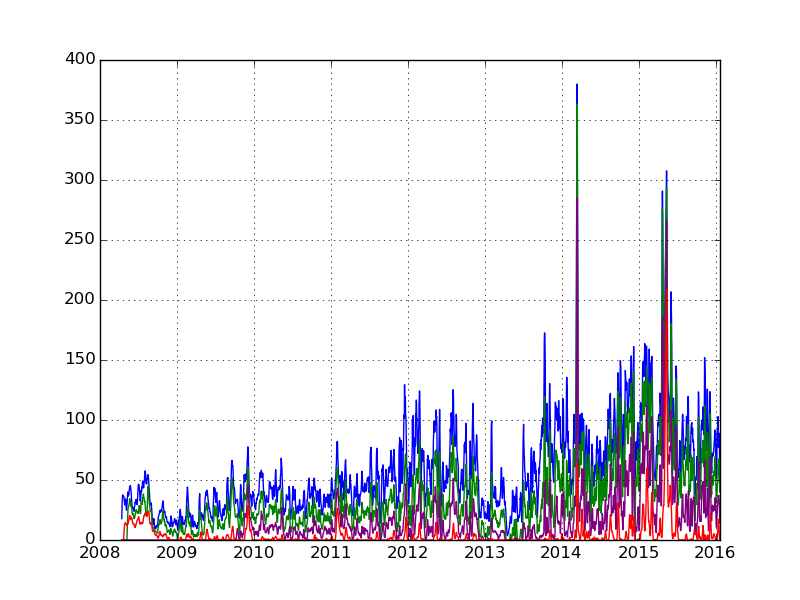 Now I was aware of it, I became much more sensitive to it and instead of building up over weeks and going just as slowly, it arrived in a day and went in a day.

I paid more attention, and as I did, I became aware of more physical symptoms that were direct results of stress. I lived with them, and considered them quite useful as signs to slow down and look after myself a bit, or signs that I needed to make a drastic decision.

As a way of monitoring such things I make some checksheets I could fill out daily. Here’s part of one: 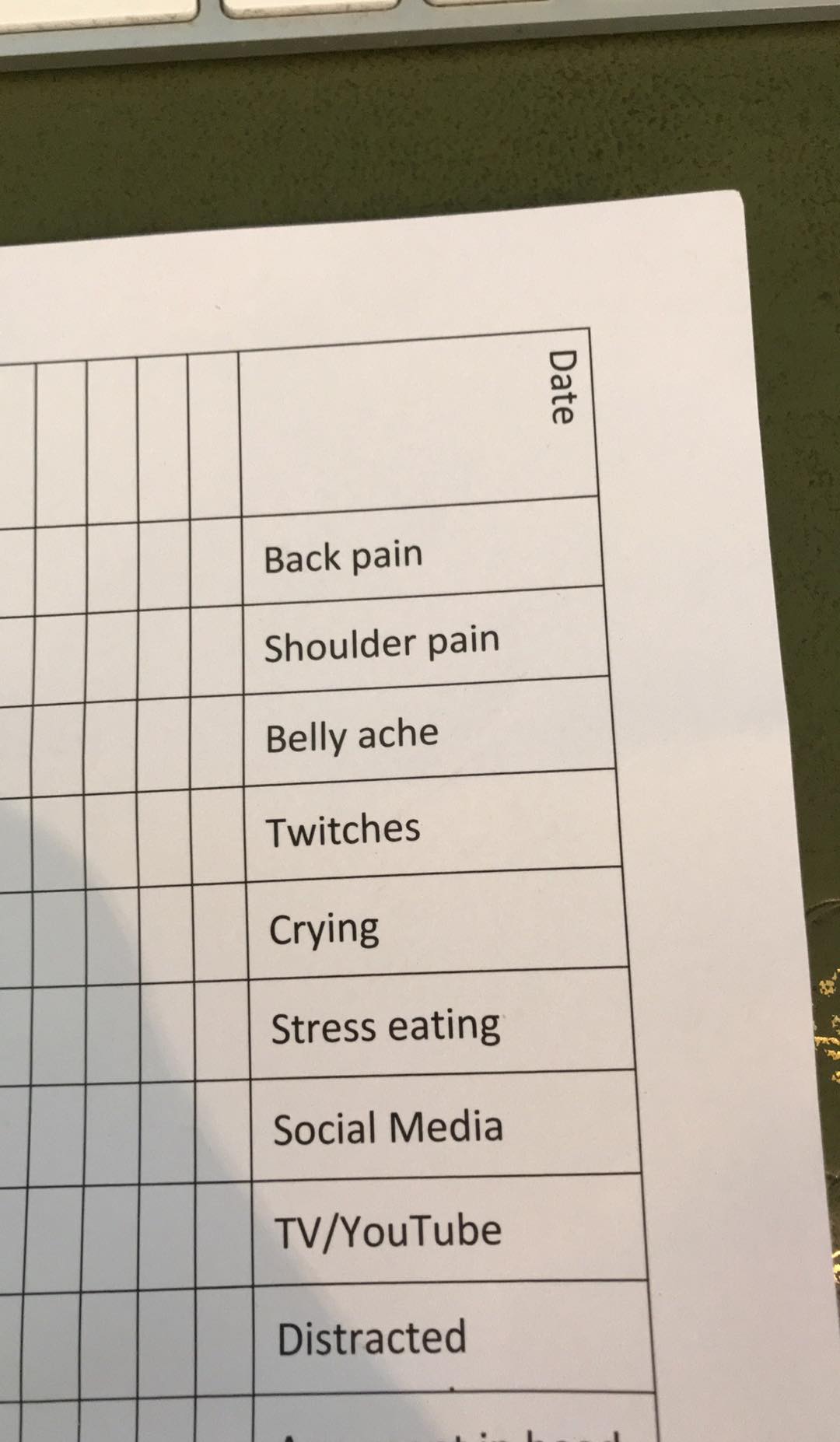 Here’s a filled out one: 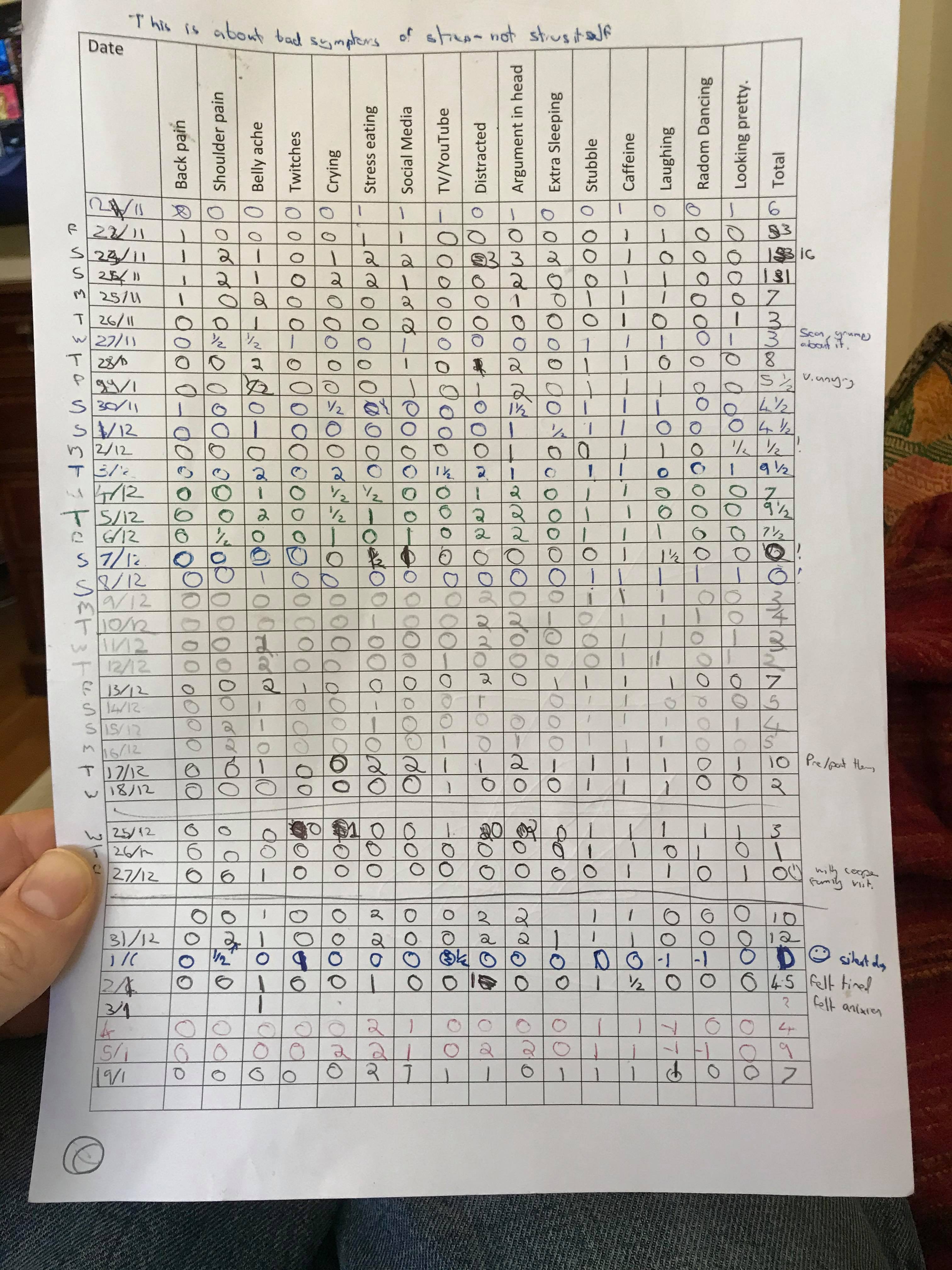 0. I don’t feel anything

2. I’m aware of a feeling and it’s making me grumpy

3. I’m aware of a feeling and it’s affecting my quality of life (i.e. canceling things, being unable to work effectively)

In about February of 2020 I gave a talk at a Sibling Support event run by Sibs. It was quite a personal talk (it was actually a rewrite - I’d been asked to do a personal talk for another organisation and then sacked because it was too personal (not even joking, but I suspect I dodged a bullet)) and I went quite deeply into some childhood issues around disability and being a sibling.

Since then I’ve had literally no physical symptoms. They dropped off. It wasn’t just the delivery of the talk of course. I sobbed over the keyboard writing for a week (this happened for both times I wrote it - the second version went a bit deeper and truer than the first).

It’s been six months and there has been no return of any of the symptoms, despite serious provocation.

So this is very positive. I’m cautious about putting too much credit on the talk. I’ve also been doing some counseling and thinking fairly deeply about other issues so the talk may simply be the straw that broke the camel’s back, or it could be an entire co-incidence. It’s very welcome though.

Coming back to this post after a year, it’s very gratifying that the physical symptoms appear to have gone for good (I also managed to remove another [mental health related issue that I wasn’t really aware was one|https://www.facebook.com/joe.reddington/posts/10100953995474230]). On the other hand, lots of the symptoms still remain: `Argument in head’, ‘distracted’, ‘stress eating’, and ‘social media’ all continue to turn up frequently, even if I wouldn’t necessarily phrase them that way any more.

It would be a good exercise for me to go back to this and write down a new list of symptoms to watch out for.